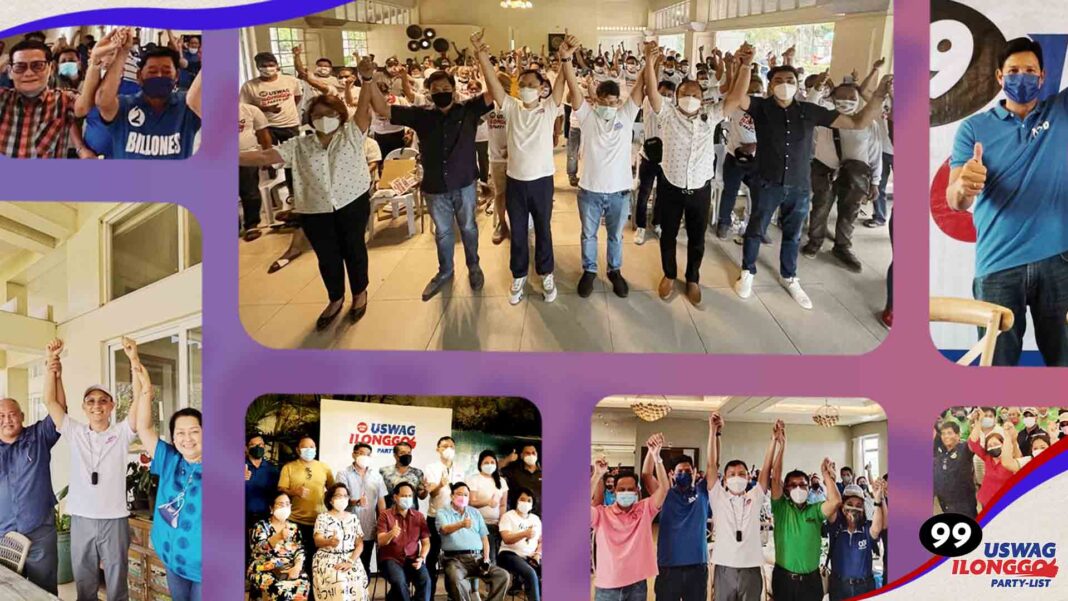 Just weeks ahead of the May 9, 2022 national and local elections, Uswag Ilonggo Party-list, No. 99 on the ballot, continues to gain ground as it has the backing of the biggest and most influential local political leaders in Western Visayas.

These leaders from the provinces of Aklan, Antique, Capiz, Guimaras, Iloilo, ang Negros Occidental believe that Uswag Ilonggo is the fulfillment of a dream of making Region 6 one of the premier regions and centers of progress in the Philippines.

Other notable leaders in the region who are backing Uswag Ilonggo Party-list include Mayor Luigi Gorriceta of Pavia, Mayor John Tarrosa of Zarraga, Mayor Junjun Jaen of Leganes, and Mayor Rema Somo of Santa Barbara, all in Iloilo province.

Despite diversities and different political affiliations, the region’s top leaders are optimistic that Uswag Ilonggo can unite all Ilonggos for one universal aspiration – the welfare of the respective constituency.

Defensor, for his part, has long been rallying support for Uswag Ilonggo, a party-list that represents multi-sectoral groups.

[“I am endorsing Uswag Ilonggo because I believe that this party-list can play a very important role in ensuring the success of many programs of government in the province and city of Iloilo.]

[Uswag Ilonggo is proud ka-Rehiyon 6. To our brothers and sisters, let us support Uswag Ilonggo… We only have one goal and that is to uplift the lives of all Ilonggos.]

In a statement, Cadiao was also all praises for Uswag Ilonggo.

“I believe that through Uswag Ilonggo, we can further forward our cause as a region and we can strengthen our strategies to stop this destructive disease and other problems that hinder our progress,” the Antique governor said.

She also believes that when there is unity, Region 6 will be more progressive despite different political affiliations.

“We should work hand in hand for us to gradually rise from the struggles and problems brought about by the COVID-19 pandemic. And this is where Uswag Ilonggo Regional Party-list comes in as the manifestation and embodiment of Region 6 as one. We help as one, we rise as one,” Cadiao added.

Moreover, Aklan leaders led by Gov. Miraflores are equally optimistic of the many developments that Uswag Ilonggo can bring to their province through its 5-point agenda.

Miraflores assured Uswag Ilonggo of solid support from the Aklanons because they believe that the regional party-list can give louder voice and will be a stronger force in the Congress to effect legislations that are beneficial to Aklan and the whole Region 6.

Also, Treñas echoed the need to send regional party-list Uswag Ilonggo in Congress for the region to have louder voice and stronger force. The Iloilo City mayor believes that Uswag Ilonggo will be very beneficial for the Ilonggos and for the region’s further development.

[I am Mayor Jerry Treñas of Iloilo City and I am humbly asking for your help for Uswag Ilonggo Party-list, No. 99 on the ballot. Let us make sure the progress of our province, our city, our region. Let us help Uswag Ilonggo, No. 99 party-list, for our region’s further development.]

Western Visayas has 5,026,482 registered voters for the May 2022 elections – the biggest voting bloc outside the National Capital Region and Luzon.
Data from the Commission on Elections (Comelec) showed the following breakdown of voter population in the region:

As a regional party-list, Uswag Ilonggo works on the mechanisms provided by Republic Act 7941 or the Party-List System Act which is defined as “A mechanism of proportional representation in the election of representatives to the House of Representatives from marginalized or underrepresented national, regional and sectoral parties, or organizations or coalitions thereof registered with the Comelec.

Previous articleGo Vegan With Face Republic’s Skincare And Enjoy 65% Off On Shopee’s 5.5 Brands Festival!
Next articlePH Covid-19 Cases Daily Average For May 2-8 Down To 161