Every Man Who Has Loved “Emily In Paris”

Every Man Who Has Loved “Emily In Paris”

Emily’s life in Paris wouldn’t be complete without “romance,” “living with possibilities” and, of course, every woman’s dream of “dating a Parisian guy.” From the beginning, Emily has had eager Parisian men swooning over her at every opportunity. Let’s look back at the several suitors who have already fallen for our favorite American in Paris as we enter yet another season of Emily’s life abroad.

But who is your favorite and which man is best for her? From worst to finest, we introduced each of Emily’s potential partners from the two seasons of the show.

In the first episode of the series, Emily arrives in Paris after an eight-hour journey. She is then given the option of going on a date after climbing six flights of stairs in an ancient apartment building in Paris with two bulky baggage. The concept of “you don’t need to have a boyfriend because you can eventually meet someone when you’re in Paris” is now very much applicable to Emily’s situation.

Agent Gilles approaches Emily less than 20 seconds after she has finished admiring the view from her new Chambre de bonne and inquires as to whether she would like to get a bite to eat at the cafe downstairs right then and there or perhaps have a drink later that evening. Gilles gets rejected by Emily due to a lover she has back in Illinois.

In the second episode, “Masculin Féminin,” Emily receives a crash course in Parisian sensuality from her instructor, Antoine, a swanky client of Savoir’s who also happens to be Sylvie’s (Philippine Leroy-Beaulieu), Emily’s stern boss. This, erm, close relationship doesn’t stop Antoine from seductively chatting with Emily during a work party in view of the popular Eiffel Tower, inhaling her scent and describing it as “expensive sex”. Antoine eventually sends Emily lingerie but denies that any of this behavior is flirtatious. The fact that this man is in love and even Sylvie is threatened is surely obvious to everyone. 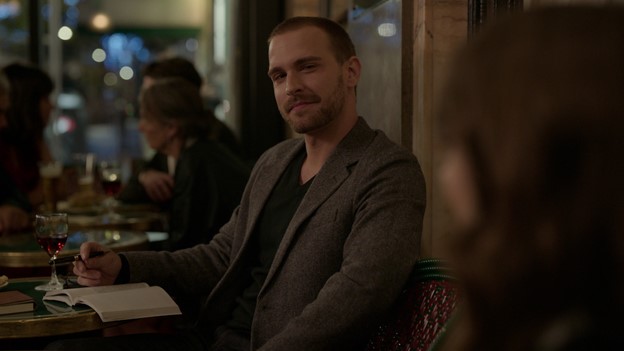 After an instant connection, Thomas is yet another Parisian relationship that ends quickly for Emily. In the episode “Ringarde,” Emily, who is seated alone, is drawn into a conversation with the nearby Thomas and, this time ends up seated next to the handsome semiotics professor at a cafe.

They begin chatting about a couple in the neighborhood, but Thomas later reveals that the conversation was just a ruse to “keep talking” to her. After a short while, Emily and Thomas are getting ready for bed. They develop a strong attraction for one another and spend two nights together (much to Gabriel’s dismay). However, the romance breaks down when Emily finds Thomas is a snob who won’t watch a free performance of Swan Lake lest it offends him.

The whole of the ninth episode, “An American Auction in Paris,” is Emily admonishing Mathieu Cadault, the Cadault fashion house’s heir. Their relationship is completely professional. However, “Mat,” as she eventually refers to him, instantly connects with Emily and engages in the sly banter that has been familiar to us from our heroine’s previous eight episodes. By the time “Auction in Paris” ends, Mathieu and Emily are sharing an intense kiss in the Cadault mansion. And in the Season 1 conclusion, they are giggling while arranging a trip to St. Tropez while cruising along the Seine in a stylish speedboat. The allure of Emily was too strong for Matheiu to resist.

Fabien has a lot of potential as a love interest, but alas, he came across a little, or rather, a lot, too strongly. In “Sexy or Sexist,” Emily runs with this dashing potential suitor while attending a wild party that Mindy Chen, Emily’s new best friend, had planned to be an intimate dinner party (Ashley Park). Emily and Fabien, who are both desperate to get away, split up and wander the streets of Paris while exchanging English and French translations. They leave after only a few seconds of meeting. La lune, which is French for “the moon,” is the topic of conversation when it first begins, but soon the two are discussing lips and necks (sensual parts). The potential love encounter in Paris is abruptly ended when Fabien whispers something intimate to Emily’s ear.

6. Gabriel (Lucas Bravo) — Emily’s romantic lead who has a girlfriend

Emily forgets that her fifth-floor apartment is actually up six flights of stairs. She tries to enter the wrong apartment door, coming face to face with Gabriel, the romantic interest who lives in the same apartment. He smiles flirtatiously at Emily right away, despite the fact that she tried unsuccessfully to break into his house. Gabriel murmurs, “Enchanté,” at Emily as he witnesses her leave for the first of many times. It’s timeless and endearing (albeit possibly technically illegal for someone you first met). In the kitchen of Gabriel’s restaurant, Les Deux Compères, three episodes later, Gabriel and Camie (Camille Razat) are making love. Emily wished he had no girlfriend.

If she had stayed in Chicago, Emily’s relationship with Doug, a Midwesterner (Roe Hartrampf), who is infatuated with the Cubs appears to be hopeful. However, a move by his girlfriend across the Atlantic never makes Doug very happy. He responds unenthusiastically with a sigh and points out her lack of French proficiency when Emily says that her company has given her the chance to operate as the “American eyes and ears” at its French subsidiary, a luxury marketing company named Savoir. As soon as Emily settles into her new life in Paris, her long-distance romance with Doug depletes.

Executive Secretary: PBBM Sincere With His Intention To Bring PH To New Heights

DepEd Teachers To Get P1-K Cash Incentive On October 5

List: Donation Drives You Can Support For Karding PH

5 Facts About Jane De Leon Aside From Her Super Powers

ICYMI: Upcoming KPOP Concerts In The Philippines This BER Months

Having A Hard Time Deciding What To Wear? These Basic, Chic Looking Outfits Are For You

The Department of Budget and Management has agreed to the release of PHP1.04 billion in additional funds on the special risk allowance to the public and private health workers responsible for the Covid-19 healthcare response.
Travel

The Philippine Racing Commission raised its goal to improve the horse raising industry in the country which they view as a boost to the tourism sector.
Local News

The bills concerning the SIM Registration Act and the postponement of Barangay and Sangguniang Kabataan Elections are now approved by the Senate and the House of Representatives which leads the president to make his final decision.
Visayas

A recipient of the Civil Service Commission award plans to help students from Guimaras to go digitalize for easy access to education.
Mindanao

The Department of Agriculture in the Davao Region sees the potential of selling the local "Puyat" durian variety in the China market.
Load more