Google has started rolling out the new features for their Workspace apps like Google Drive, Docs, Sheets, Slides, and Keep. The update is part of the company’s move to maximize the utilization of large screens on Android devices.

“Earlier this year, Android introduced 12L, a software update to make devices with bigger screens, like tablets, easier to use. At I/O, we shared plans to update more than 20 Google apps on tablets to take full advantage of the extra space on those bigger screens,” Scott Blanksteen, Senior Director for Product Management on Android, wrote in a statement.

The new Workspace features center around the ability to multitask on your device. 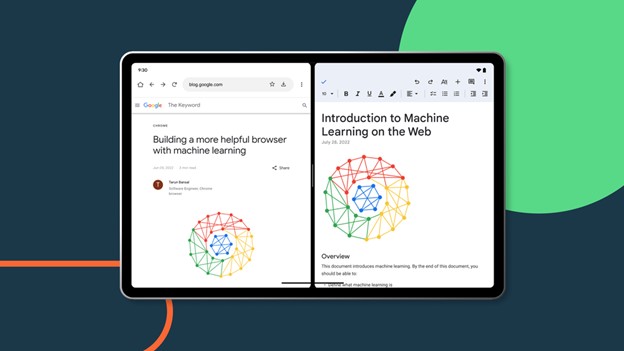 In the new update, you can easily drag and drop texts and images from two different apps while using split-screen on your device. This means that you can transfer your selected content from one existing document like Word to another document or even a spreadsheet cell. Additionally, the feature will allow you to upload to Drive by dragging the files or inserting images on Keep from the image carousel.

The new update also makes using Google Drive on large screens easier. You can now open two drive windows side by side, selecting the three-dot menu on any Drive file and tapping on the “Open New Window” option. This will allow you to get the necessary information without losing your current view or using the back button multiple times.

Lastly, users can now use the familiar keyboard shortcuts from their laptops to their tablets and large mobile screens. If you are using the attached keyboards, you can use keyboard shortcuts like select, copy, paste, undo, and redo to navigate through Drive, Docs, and Slides. This allows users to use their devices as an alternative to laptops and PCs.

In March 2022, Google introduced a new Android 12 update called 12L to make using tablets and foldables much easier. The new feature added a new design layout for easy viewing and a taskbar that can launch split screen mode and other multitasking features.

Users can expect the new updates to roll out over the next few weeks. It will be available on Android’s large screens with Google Workspace and personal Google Accounts.

List: Donation Drives You Can Support For Karding PH

5 Facts About Jane De Leon Aside From Her Super Powers

ICYMI: Upcoming KPOP Concerts In The Philippines This BER Months

Having A Hard Time Deciding What To Wear? These Basic, Chic Looking Outfits Are For You

The Department of Tourism aims to bring back local tourism in Eastern Visayas after being on hiatus for two years due to the pandemic.
Local News

The Catholic church's humanitarian arm has asked for additional support for victims of Typhoon Karding helping them to recover easily from the catastrophe.
Local News

Fulfilling his promises during his first state of the nation address, President Marcos Jr. issued an executive order helping agrarian reform beneficiaries to pay their debts on their farmlands.
Spotlight

The Department of Social Welfare and Development in Western Visayas has acknowledged an indigenous people family in Iloilo as the 'Natatanging Pamilyang Pilipino' for preserving the Panay Bukidnon culture.
Load more